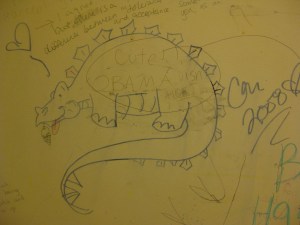 I don’t even know what to say about this. Probably that it’s the cutest Stegosaurus I’ve ever seen. Forget Jurassic Park or We’re Back! A Dinosaur’s Story or even The Land Before Time (one through infinity). Who has this much time to draw a huge dinosaur on a bathroom stall? I should have taken measurements so I could give you a better impression of him.

Could it have been an art major? Maybe. She must have been in a rush to not have made it as detailed as I would expect from an art major. Or it must have been rush hour in the women’s restroom at the Foreign Language Building and there wasn’t enough time: long lines and anxious women equal anarchy.

How about a visual communications major? My friend does a great job with graphics and illustrations. Very playful and clever. Perhaps this fine artist is in a similar field? I find faces the hardest things to draw. I’m not that bad at mastering the right eye, however, the heads of anything seem to be the most difficult. But this artist makes it seem so easy.

Maybe she just likes to draw and is good at it too. But honestly, who has enough time to draw a dinosaur on the wall? Was it before class? After? Feeling inspired by thinking about a nephew? Does it really matter at this point? Whoever you are, you had way too much time to draw this adorable creature and have done an excellent job at doing so. Kudos.