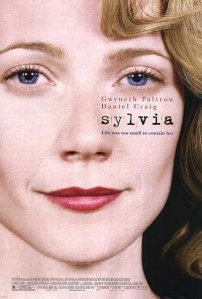 I am by no means a movie critic, nor am I a Sylvia Plath expert. However, I watch a lot of movies and have studied a little bit of Plath. That counts, right?

I came across this movie through Netflix (shout-out to my brother who shares his Netflix account with me!) and instantly clicked on it. I knew that Sylvia Plath had struggles throughout her life, especially with several attempts of suicide and a difficult marriage with Ted Hughes, but sometimes it is easier when it can be visualized. When I studied Plath last spring, we read her poem “Daddy” and examined it extensively. Each student was given a stanza to dissect: I was assigned that last stanza, with the famous last line. It was a productive group discussion which revealed much autobiographical information and inspiration for her writing: her relationship of her father, her relationship with her husband Ted Hughes, her attempted suicides, and filled with metaphors and imagery of torture and pain.

I wish we studied more of Sylvia Plath: her life (both growing up and her life with Ted Hughes), her writing and her career. But seeing as that could not be fit in the syllabus (because we had so many other amazing women writers to study), I feel like this movie was an exceptional portrayal of what I had been missing.

These are the other women writers we studied simultaneously the week we studied Plath.

Granted, this movie begins with Sylvia Plath, a student at Smith College, and her past is revealed to viewers through conversations throughout the movie; but I am not upset by this. In fact, I think by revealing this information sporadically, it rendered more useful to the audience and to the characters.

I don’t want to reveal too much about the movie. I mean, I can’t really spoil the ending, can I, since it is already known that Sylvia Plath committed suicide?

I will say this though: the dynamic between Daniel Craig and Gweneth Paltrow’s portrayal of Ted Hughes and Sylvia Plath respectively was spectacular. There was a great cause-and-effect reaction between their relationship, and the feelings of love, jealous, anger, suspicion, animosity, fear, lust, betrayal and defeat were played out so well.

I don’t want to say it was an emotional experience for me to watch this movie, but there were definitely moments where I felt those same feelings as Sylvia (the anger, the suspicion, the betrayal, and some potential hopefulness). Especially the moment where Sylvia starts writing and reciting her poem “Daddy,” that’s when, I think, Sylvia frees herself from the chains of her past and finally lets her creativity–that was stifled for so long–be released. And the audience feels this release, as well.

This might lead to a path of watching biographical movies about writers, so it’s time to start compiling a list!

2 thoughts on “Movies about Writers: Sylvia”