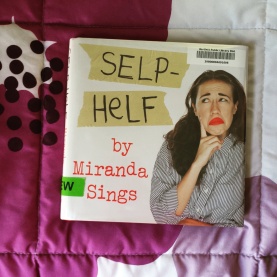 Last year seemed liked it was the year that dozens of YouTubers signed book deals. Or maybe the tiny snowball started rolling downhill in 2014 but grew to much larger in 2015. Let’s see, who was on that list… Zoella (Girl Online), Alfie Deyes (The Pointless Book), Marcus Butler (Hello, Life!), PewDiePie (This Book Loves You), Hannah Hart (My Drunk Kitchen), Mamrie Hart (You Deserve a Drink), Grace Helbig ( Grace & Style: The Art of Pretending You Have It ), Tyler Oakley (Binge), Joe Sugg (Username: Evie), Shane Dawson (I Hate My Selfie), Joey Graceffa (In Real Life: My Journey to a Pixelated World)… and that’s just to start.

But one YouTuber stands out in a different way… Miranda Sings. If you’re unfamiliar with her, well… How do I put this… Miranda is a delusional character who believes she’s the biggest YouTube celebrity ever (in reality, she probably is up there on that list because of this misconception or extreme self-confidence), and is obsessed with herself and thinks she’s the most talented person ever. That’s her schtick. She’ll do music videos, tutorials, reviews, challenges — and do them all incorrectly or poorly — but with the full belief she’s the greatest. Oh, and she wears bright red lipstick that goes beyond her lips.

Anyway. This review probably won’t make sense unless you watch a few of her videos, so… get on that if you haven’t already. I know the Instagram I shared is really enticing.

Self-Help doesn’t hide at all what it is, which is a book written by Miranda Sings, a character created by Colleen Ballinger Evans. It’s not Colleen writing the book; it’s Miranda. If you’ve watched her videos (I’ve given you enough warning to do it), you shouldn’t be surprised by what’s coming: It can be best described as a scrapbook made by a child with craft supplies, drawings and handwritten notes. Miranda literally takes the approach of “write what you know” when it comes to fashion, hygiene (it’s a section in her book, no joke), puberty, work and career, relationships and DIY. She believes that no one is more attractive or better skilled than she is; that Jesus is always watching; that French kissing leads to babies; and puberty doesn’t happen until 21.

I’m not an avid follower of Miranda (or a Mirfanda), but I’ve watched several of her videos. I could hear her voice and mispronunciations of words while I read this “self-help” book. Every misspelling and exclamation point made me believe that Miranda authored this self-help book of bad advice.

I’m not knocking the book–it’s great if you’re a fan of hers, and it’s meant to be more carefree and silly anyway. But if you’re only a casual viewer then you’ll probably only “like” this book or find it mildly humorous and not think it was the best book ever. And I’m sure if Miranda were here, she’d angrily shout, “Haters, back off!” with a smirk to back it up.

Excellent creativity and follow-through on Colleen’s part, though. Well done.

3 out of 5
Copy from local library

One thought on “Review: Selp-Helf by Miranda Sings”